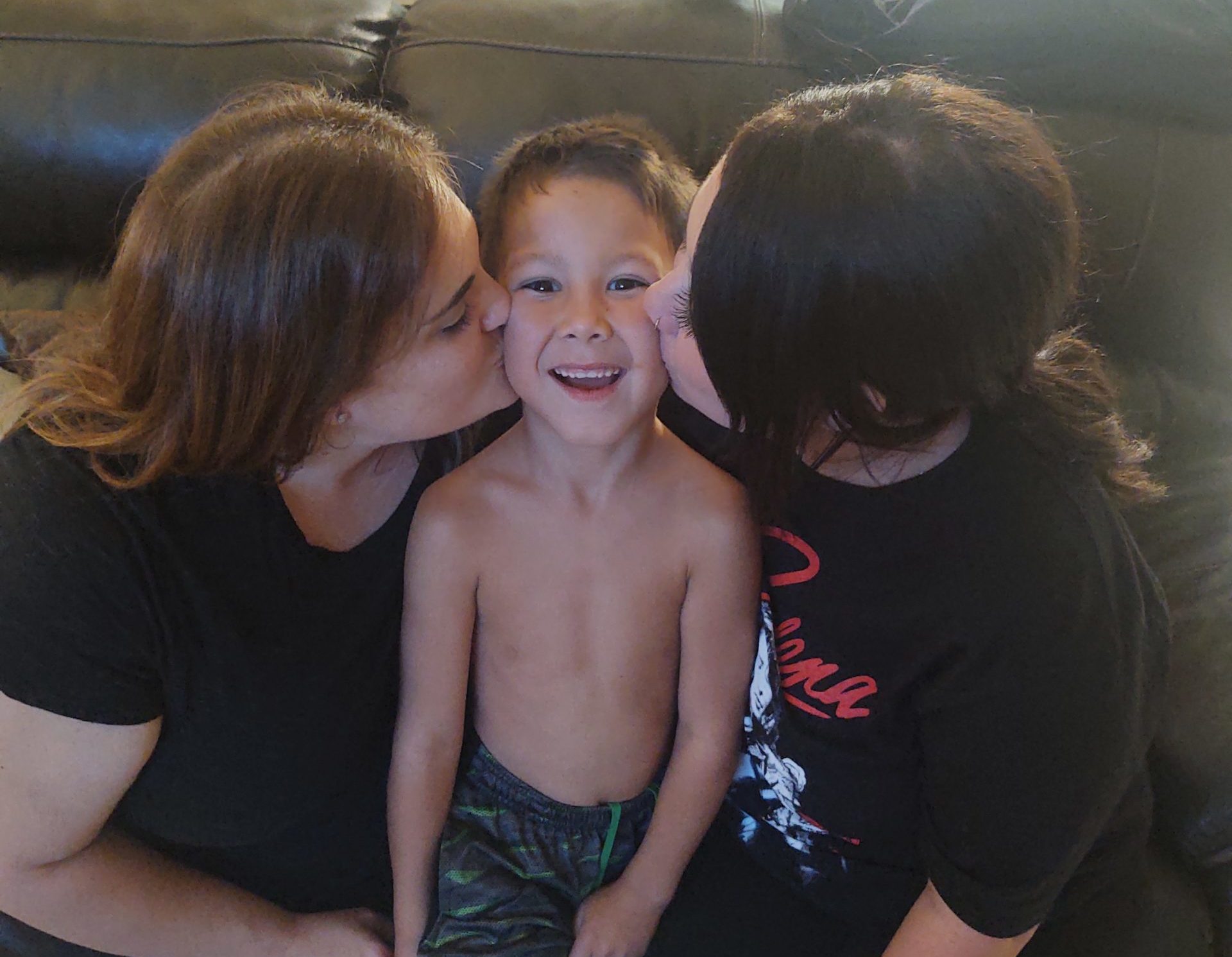 In this episode of the Family Care Learning Podcast, we hear from biological mom Kim and adoptive mom Billi, and how they started their new relationship and the blessing that came from their relationship. It’s a conversation between two women that absolutely love their little guy named Braiden and because of him, they were able to remain humble and really focus on what’s best for him. At Christian Family Care, we encourage all families when possible to have an “open adoption” which is when you include the biological family in the adoptive child’s life.

Read below some quotes from the conversation between Kim and Billi. You can listen to their full conversation by watching the full video here!

“I first got in contact with Kim when Braiden, our third son came into our lives through the foster care system,” Billi, the adoptive mom said. “There was a little bit of fear, just fear of the unknown, you know, I just, I didn’t know this person, but there was this baby, this child whom I loved fiercely. I was worried about what she thought of me,” Billi shared. Little did they know at the time that God was working in their lives to one day have an incredible relationship that truly blesses their son and each other.

“I’ll never forget the day that I went into labor because I was by myself going into labor and at that time, I was going through a lot with not having any family and a relationship with domestic violence, and I at that time was homeless,” Kim said. “I remember giving birth and calling them and telling them I had given birth and they were like, we have to take him and I was just really sad because I got to hold him for a little bit, and then someone just walks away with your baby,” Kim said. She shared it was a very empty time for her.

Then Kim recalls seeing Billi in court one day. “I remember thinking, wow, she looks like an amazing mom and I never had any feelings of how dare you or anything like that, I just wanted him to be okay,” Kim said.

Kim remembers a lady telling her at that time that she didn’t have much to offer her son, Braiden as far as him having a better life. “She said they could provide a better life for him but I didn’t want to be without my baby, but I looked at him and I couldn’t picture him going through what I was going through and it wouldn’t be fair,” Kim said. On that day she knew she loved her son but she saw a better opportunity for him with Billi and her family as his adoptive family.

“I had to realize that everything’s going to be okay and as long as he’s okay, that’s all that mattered. I think my feelings kind of really didn’t matter anymore. Even though I felt sad and I would cry a lot, I realized what matters is him and what he’s going to be able to accomplish,” Kim said.

Billi shared what it was like for her after the adoption of Braiden was finalized.

“I reached out and I was like hey, do you want to be involved at all? I would love to chat with you. We could FaceTime. I don’t really have any expectations, like how do you feel about this?” Billi said.

Billi shared what her emotions were at that time and that they were not focused on herself but on what could be best for Braiden. She also shared some of her raw thoughts like, “Is he going to gravitate more towards her, even though I’m doing everything?” Billi grew up in a blended family herself and learned that she really wanted to create a safe, peaceful place for her son to be able to talk about any of this with either his bio mom or adoptive mom.

Billi broke it down a little more explaining how surprising it was to find that her love could be matched for her son.

Billi encourages other bio moms and adoptive moms not to be fearful about having an open adoption. You have to move away from worries that he’s not going to love me and just focus on how well we can love him.

Billi said she understands not all situations are going to turn out and look just like hers and Kim’s relationship as bio mom and adoptive mom however she reminds us of what God has called us to.

“We are called to brotherly/ sisterly love,” Billi said. “That’s not just when you’re at church, it’s getting out of your comfort zone and reaching out and saying yes,” she said.

There’s often an impression to keep bio families and adoptive families at arm’s length from each other but that doesn’t have to be the case. It can be such a tremendous blessing to keep the child’s relationship with their bio parents while being raised by loving adoptive parents at the same time.

Kim shared with us that although she lost her mother and father and one of her siblings she feels like she gained another family through the adoption of her son Braiden and how welcoming Billi’s family has been to her.

“God has brought these people into my life and my kids’ lives and even when you think you are alone, God’s like, you’re not alone,” Kim said.

Billi also shared how her relationship with Kim has blessed her in recent weeks when Billi’s family decided to take Kim into their own home while she was going through a difficult time.

“I’ve loved doing life with her just the last week and a half,” Billi said. “I mean just watching her having a tough year this last year with some stuff, but she bogged down and rose to the occasion, which I knew she had that in her. She’s a fighter so just watching her just keep overcoming and just keep building for herself and for the kids; I respect that so much in her,” Billi said.

As far as how their relationship has blessed their children, Billi shared how all kids want to know where they come from. They want to know their identity, where they get their looks from, their genetics, experiences and just wanting that connection with their biological mother.

Kim said being involved in her son’s life and being welcomed as sort of a co-parent at times has been such a blessing in her life and has taught her many things. Seeing the way Billi and her husband parent the kids have encouraged Kim as a parent as well. “I’ve learned things. I’m like, hmm I’d like to take that back with me and start doing that with my family,” Kim said.

If foster or adoptive parents have a desire to reach out to the biological parent/s, Billi and Kim shared some advice and words of encouragement about those who may be experiencing some fear or anxiety about forming this connection.

“I think they shouldn’t have fear,” Kim said. “I think they should give it a try because it’s not just for us as parents, it’s for the kids. These kids want to know where they came from and it’s also about giving them that peace of mind,” Kim explained.

Billi shared a great way to make the first step towards building a connection between bio family and adoptive family.

“If you’re scared, write a letter to them and just be like, this is who we are, your child is safe, we love them, this is what they’re doing this, and so on,” Billi said.

“If you truly believe that God gives you grace and you understand His grace and His love, you need to extend that to others,” Billi said.

The story that these two mothers share is so beautiful. It’s not always easy. There is sometimes anxiety, worry, brokenness along the way, but as they both were deeply loving these children, they found common ground and got to know each other and extended grace because that’s what God does.